Doesn’t it seem that in the olden days, children were naturally fit and healthy? It just happened effortlessly, since they were always playing and running around outside. It’s not the same in the 21st century. Parents, fearing potential threats, won’t let their children play outside quite as much (it’s worth noting that crime rates are significantly lower than the olden days, however). Children, too, seem pretty happy to be indoors, playing on the smartphone or tablet. It is important, however, that children stay healthy — the earlier it becomes part of their lives, the more likely it is that they’ll be healthy in adulthood, too. 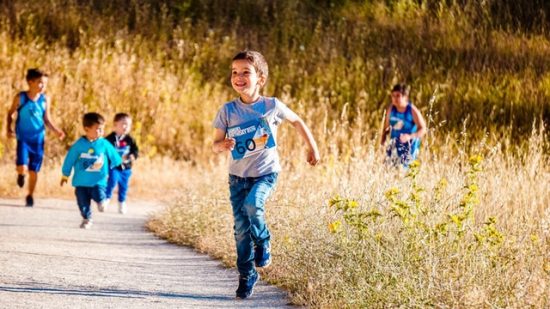 Moving your body and working up a sweat is a fundamental aspect of staying healthy! So you’ll want to ensure that your children are getting enough exercise. How they do this will depend on various factors, such as what they like to do. Signing them up for a sports team is one effective method, since it’ll keep them engaged while they’re getting exercise. Plus, there are other benefits to joining a sports team, too, such as learning how to work with others, making friends, and so on.

All children want to play. Left to their own devices, they’ll run around for hours and hours! But of course, they’re never left to their own devices. They have a smartphone, tablet, video games, and so on. While it’s not recommended that you take these devices away from your children entirely, you could look at reducing the amount of time they can spend with them. They’re designed to be as addictive as possible (there’s a reason why Apple executives don’t give their own children smartphones). When they’re removed, your child will likely look to play outside with their friends. A simple way to keep them healthy and having fun!

One of the reasons why we’re seeing increasing rates of child obesity is that, simply, many children aren’t eating as well as they could or should. This, of course, isn’t the fault of the children. As a responsible parent, you should ensure that your kids are eating healthy, nutritious meals. Of course, if you’re not used to cooking, then this could be daunting — but it’s easier than you think. This Plated meal kits review discusses how the system can provide time-limited families with healthy food options, for instance. It’s really important not to overlook the food component of keeping your children healthy — it’s arguably just as crucial as getting enough exercise.

It’s easy to forget that humans don’t really belong inside. We’re not supposed to be sequestered away from nature all the time! It’s really important for children to have a connection to the outdoors. It provides a natural playground where they can get fit, for starters, and also promotes good habits. It can also provide a boost to a person’s mental health, too. They will be happier and calmer for having visited the great outdoors with their family, essentially.