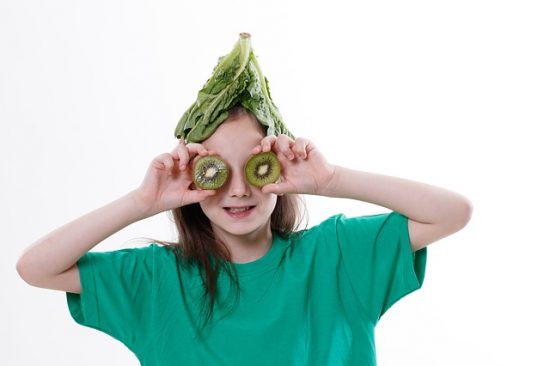 One of the biggest worries and challenges for parents is how to encourage your kids to live healthy lifestyles and make good choices. We can cook them healthy and nutritious meals at home, and ban all sweets and sugary snacks from the house, but what about when they’re out and about? Are they brushing their teeth and washing their faces when they’re at a friend’s house for a sleepover? It’s impossible to know. So what are some of the best ways we can give them a sense of responsibility when it comes to their own health, and persuade them to make positive choices both in and out of the home without starting World War Three?

Perseverance is absolutely key when it comes to your kids having a balanced diet. Although it might be tempting to avoid conflict and a screaming match by giving them food they’ll eat without a fuss, this won’t do you any favors in the long run. A well-balanced diet includes a mixture of different fruits, vegetables, carbohydrates, proteins and nuts. They might be accidentally missing out on a range of nutrients if they are fussy about trying new things. Here are a few ways you can tempt them towards a nutritionally balanced diet – and once they start enjoying a range of food, they’re far more likely to choose it by themselves outside your supervision.

– Mix veggies into favourite dishes. One of the best things about vegetables is how versatile they are. A lot of them can easily be mixed into other foods and before long your kids will be eating them without noticing. Try adding grated carrot to a tomato pasta sauce or using cauliflower rice instead of regular with a chilli. Chopped spinach can go onto pizzas as well as sauces and sweetcorn (many kids’ fave anyway) can be added to pretty much anything.

– Get them involved. Once they’re at an age where they can be included, one of the best ways to foster an interest regarding their food intake is to cook with your kids. Get them to touch, smell and taste the ingredients as they’re going in. If something’s ‘gross’ when it’s raw, what’s it like when it’s cooked? Chatting to them about where the ingredients come from and how they’re grown as well as the different ways they can be cooked is a great way to interest your children in what they’re eating.

– Don’t give up. So they didn’t like boiled cauliflower? That’s ok – some adults can be fussy about boiled veg too. That doesn’t mean stop trying – a multitude of things that are passed over when boiled or steamed suddenly gain a whole new appeal when roasted or fried (and a little bit of cheese never hurts either)! That’s not to say this is how you should win them over every time, but proving to them it isn’t the vegetable itself they aren’t keen on means they’re more willing to give it another go in the future.

This is one where leading by example is one of the best policies you can adopt. If you are willing to improve your oral health, your kids will be much more likely to follow suit. When they see you cleaning your teeth every morning and evening, they will understand it’s normal practice and continue the habit when they need to take responsibility for looking after their own teeth. It’s advisable that you start brushing your child’s teeth from about six months old, or when their first milk tooth breaks through. Getting them to do it themselves though, for the recommended two minutes twice a day, can be a whole other feat entirely. A little creativity can go a long way when it comes to looking after their long-term dental hygiene!

– Don’t make going to the dentist a chore. Take them with you when you go and, even if you aren’t comfortable or don’t like it, try to put on a brave face. They will hear enough horror stories about the dentist over the course of their lives so try and be encouraging about their first experiences. Ask the dentist if they can sit in the chair, look at the instruments, and generally explore the situation, even before they’ve begun to have routine check-ups themselves – remember, the dentist doesn’t want your kid crying in their chair any more than you do!

– Make teeth-brushing fun. Rather than setting a timer and making this into a daily chore, aim to let teeth-brushing be something fun. There are apps and videos which are specifically designed to support you with this – try Heroes of Hygiene to keep your kids engaged for the full two minutes while they clean their teeth.

When we think of exercise, most of us are visualizing going for a jog or spending time in the gym. But kids are physically active in so many different ways and, as parents, part of our jobs is to encourage them to stay active for long-term health and other benefits. These include a lesser chance of developing type 2 diabetes or obesity, stronger muscles and bones and lower cholesterol. You might have also become aware of the mental health benefits which come along with regular physical activity. This is true for children too. Even though they are unlikely to be facing the same financial, relationship or career stress as adults, spending time outside and engaged in exercise still releases endorphins and therefore encourages them to have a more positive outlook on life.

– Do it with them. Even if you aren’t at peak fitness, getting involved with their games and play is a great way to keep them going.

– Encourage support of sports. If they are influenced by following a particular team sport, talking to them about the possibilities of them joining a local team or club.

– Compromise. If you’re taking them to the movies, make it a rule that they have to spend half an hour in the park first. If you set this up early enough, it might not ever cause an argument!

We all know the importance of looking after your and your kids’ health. Don’t be defeated and try these simple techniques for encouraging your children to engage with a healthier lifestyle, both for now and the future.